The 25 april 2015 earthquake of 7.8 (!) on the Richters scale which occured in Nepal around noon, had a devastating effect: thousands died, thousands were injured and material damage was enormous.

The Gesar Fund board remembered this disaster which occured allmost exactly five years after the devastating 2010 earthquake of Qinghai. We asked ourselves if we should donate to help the visctims in Nepal.

We think however, that we cannot account for such an action to our donors. The objective of the Gesar Fund is improving the living standards of the poorest Tibetans in Kham and Golok in eartern China. This restriction also is our strength: the Gesar Fund has dorect conttrol over how the monet is spend which wouldn’t be the case if we donate money to a NGO our foundation that organizes aid in Nepal. 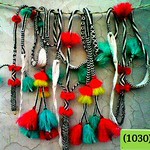 Boardmember Nyima Kunga travelled to Kham (East China) again and checked how the Gesar fund’s money was spend. In 4 updates we get an accurate picture of the current situation and the latest developments.

Testing on Hepititis and TB for the Tibetan Youth – Part 1

In Chengdu the Gesar Fund provided and executed free of charge TB and hepiptitis tests for all students!

In case students were infected they were send to the Chengdu Peoples Hospital for treatment. 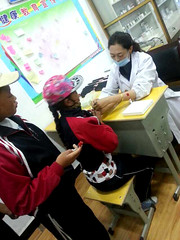 In China people have the right to be TB-tested and treated for six months. Most of the people, not only the nomads, are not aware of this. Therefore the Gesar Fund educates the people regarding Chinese healthcare and regarding to prevention of diseases and infections.

The treatment of TB has quite an impact on the liver and stomach, expecially when the health of the patient is not very good. Medicins are not reimbursed by the goverment. In case people are not able to pay the medicins themselves, the Gesar Fund also spends money on medicins against the side effects of TB medicins.

The Fighting Hepititis project aims at testing in hepatitis A and B and on vaccinating people who have no antibodies in their blood. The costs of the vaccin and the tests are paid by the Gesar Fund, so that the often very poor also have access to this healthcare. Also the people are educated how to prevent infections and what can be done to stimulate recovery of this disease. Education mainly is given by the enthousiastic doctors and nurses of the Peoples Hospital we cooperate with. Apart from that we have our team of local volunteers.

For permanent immunity three vaccinations are needed. The standard price for vaccinating one person is 60 Yuan (7 Euro). Thanks to the discount the Peoples Hospital grants us we can vaccinate for 45 Yuan (5 Euro) per person! After the big eauthquake in 2010 the Gesar Fund in one year paid for 6000 vaccinations.

Testing on Hepititis and TB for the Tibetan Youth – Part 2

A month ago the Gesar Fund published a newsitem about the free Gesar Fund Hepatitis and TB tests for all students of the Chengdu primary and secondary school.

Every student who was tested was asked to help out the elderly with daily activities, fix things and keep compagny. There also has been a group of students informing the public orally about TB and hepatitis: especially about prevention!

Under the Chinese population hepatitis as well as HIV is a serious taboo and although people rarely die due to hepititis B, the fear of this disease is big. Part of the health care education is taking away this fear from the people.

In the district where Tibetans live 60% of the people carried the disease or still are carrying it. Most infections are transferred from inected mother to baby. The chance on chronical Hepititis with the babies is very high as in 90% of the cases they do not have the strength to overcome it by themselves, whereas adults often can. As a result this will cause a life-long  poor health which in 2% of the cases will result in liver cirrhosiss or liver cancer. The later people get hepatitis B, the greater the chance on curing by themselves. 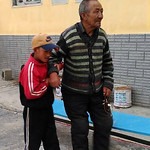 For the photos, check the Gesar Fund on Flickr

This big campaign was a huge succes and there are plans to repeat it next year! Help us making this possible by making a donation on our Donation Page. Also small donations are very welcome!

Testing on Hepititis and TB for the Tibetan Youth – Part 3

In the previous two Gesar Fund Updates (1e update:26-09-2015, 2e update:23-10-2015) we informed about are new (big) campaign regarding performing TB and Hepatitis test on some 1000 students of a Chengdu primary and secondary school.

The actual testing was finished 6 weeks ago, the most (free) treatments of students who reacted positive on the tests allmost are finished. 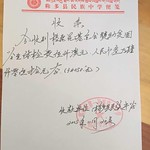 Thus the Gesar Fund transferred the money (5000 euro) for the tests and vaccinationsofficiallly to the school in form of an official document. 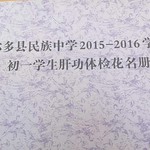 Also the Gesar Fund presented an offical Document of Confirmation over the year 2015-2016.

So this big campaign will be repeated next year!

Help us making this possible by making a donation on our Donation Page. Also small donations are very welcome!

News from the Education Project 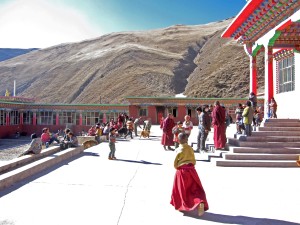 Just before Christmas the Gesar Fund received a message from the Konchok Foundation which is supported by the Gesar Fund with some 5000 euro per year. In the Gesar Fund 2014 Summary we allready reported things would change in the education programs the Surmang monastery offers to adults and children. The announced (new) educational program for (young) adults has been realized. 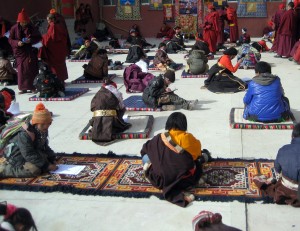 The adults of this program now also are contribute to the children’s program by offering a save container as Khenpo Tsering, the monk who teaches the cildren for years now, indicated how he struggles with the class due to all the turmoil of (especially) the ‘wild’ boys. At times he had to stop the program as winwos and furniture needed to be repaired! And after resuming the program things often would go wrong again… 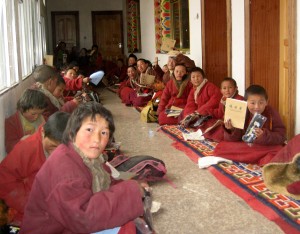 We rejoice in the fact that this winter, thanks to the extra adults helping out, the programs for the children have been resumed! Now also a small group of children get lessons at the Wechen nunnery!   The group in the Surmang monastery consist of more than one hundred children, and both groups have their lessons mainly in the winter months.